Things You Need to Know Before Visiting Altai

There are many things to know about Altai that can make all the difference between a great travel experience and a negative one. We obviously want you to always have the best experience as possible in this magic place.

As the Altai Republic borders with Mongolia, Kazakhstan and China, it is necessary to get a border crossing pass to visit Ust-Kanskiy, Ust-Koksinskiy and Kosh-Agachskiy districts. Processing and issuance of passes is made in the Border Department of the Federal Security Service of the Russian Federation in Gorno-Altaysk, the Altai Republic. Our company issues the passes for all our tourists free of charge. While visiting the border area you should always keep the passport and pass with you.

Russian citizens need a pass only to enter the five-kilometer zone along the border, for example, to visit Tomsk sites and Belukha Mountain. If you don’t plan to climb so far, just show the passport at the checkpoint. 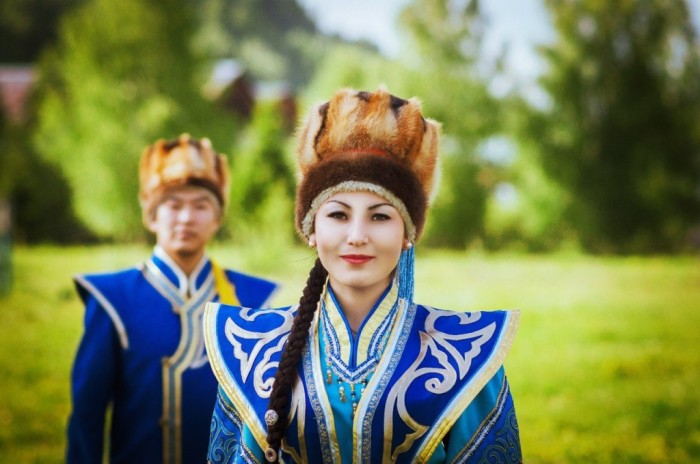 The Altai are people with Asian appearance, very distinct. They have their own language and have preserved the traditions of their ancestors.  They are pagans and shamanists. Those who were born in the USSR mostly have Russian names, young people have Altai ones.

The attitude towards tourists and travelers can range from outright hostility to active benevolence (there are a lot of subtleties in both ways). It is important to quickly analyze the situation and behave accordingly. The attitude towards you depends on many factors. But the main suggestions are obvious:

- do not communicate with a drunk (do not join in conversations, show indifference, avoid neighborhood);

- do not be noisy and provocative, do not throw things, do not demonstrate wealth;

- do not trespass, do not let strangers in.

Less visited places tend to be safer. Relationships with locals are more comfortable there (indifference is preferable to any attention).

Tipping in cafes and restaurants is not common, but nobody would mind it.
Guides that serve foreign tourists expect to be tipped. 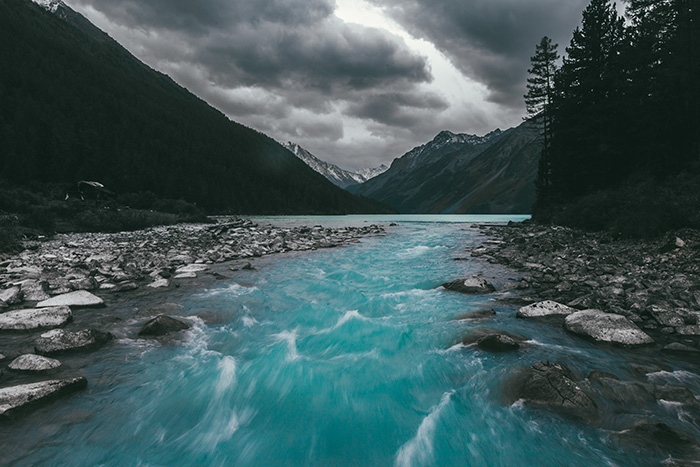 4. You can drink water almost everywhere

Mountain streams and rivers are very clean. Without any fear you can drink water from those rivers where there are no grazing cattle and housing upstream. There are no industries and drains in the Altai Republic.

The quality of communication between different operators may vary from village to village, but in general, in the Altai Republic, MTS and Beeline operators prevail. The situation is worse for MegaFon and Yota, which are represented only in large villages. Tele2 is available only in Gorno-Altaysk.

Many locals use phones with two SIM cards for MTS and Beeline.

Many tourists who plan their trip to the Altai are faced with not quite fair information and rumors from various mass media and other sources about ticks and tick-borne encephalitis. Rumors on this subject are not groundless, but often seriously exaggerated. Not every local resident sees a tick at least once a year, and tick bites are even more rare. In addition, not all ticks carry encephalitis. Ticks reach peak activity in April and May. In summer, the probability of a bite is much lower than in spring. In addition, if you follow basic rules, the probability of tick bite drops to zero, because a tick, once clinging on your clothes or body, does not bite for a very long time (several hours). Therefore, periodically examining yourself, you will easily notice the tick and remove it from your clothes. Most often ticks are found on low bushes and in tall grass. After visiting such places, it is desirable to examine yourself.

One of the effective means of prevention is vaccination, which must be done in advance. Vaccines do not guarantee complete protection from encephalitis, but considerably facilitate the course of disease.

The most popular and effective is insurance against tick bite which costs about 400 rubles. In case of tick bite, the insured person is given a free injection of anti-tick immunoglobulin (this must be done within 2 days after the bite), which eliminates any negative consequences of the bite. An immunoglobulin injection can be given without insurance in almost any hospital and medical center, but it will cost from 5,000 to 10,000 rubles depending on your weight, which is more expensive than the cost of insurance.

Popular in Russia apps Uber and Yandex do not work in the Altai Republic. You will need the services of local taxi drivers. There are taxi dispatch services in Gorno-Altaysk. Otherwise it is necessary to know taxi drivers’ numbers, which you can get in your hotel or tourist camp.

The Altai is home to 90 species of mammals, 260 species of birds, 11 species of reptiles and amphibians, 20 species of fish. Many of them are listed in the Red Book (snow leopard, marbled polecat, manul, Siberian red squirrel, demoiselle crane and others). There are representatives of taiga forests and foothills, as well as animals of steppes and semi-deserts. The fauna includes animals and birds found only in the mountainous zone: argali (mountain sheep), boone (mountain goat), irbis (snow leopard), golden eagle and snowcock. Among the animals of the tundra there are reindeer, rock ptarmigan. In the forests of the Altai live flying squirrel, chipmunk, sable. A brown bear is the most typical representative of the taiga. Also, there are lynx, wolverine, otter, ermine, badger in the forests of the Altai. Low-snow areas are inhabited by roe deer, wolves and foxes.

Animals in the Altai are met at every step. Mostly it is cattle and harmless gophers, but you should be careful. Do not come too close to cows and yaks as they can bite or kick you. Animals with calves are particularly aggressive.

Do not try to catch a gopher or a marmot. Firstly, it is almost impossible. They are very careful and fast. Secondly, they can carry plague. 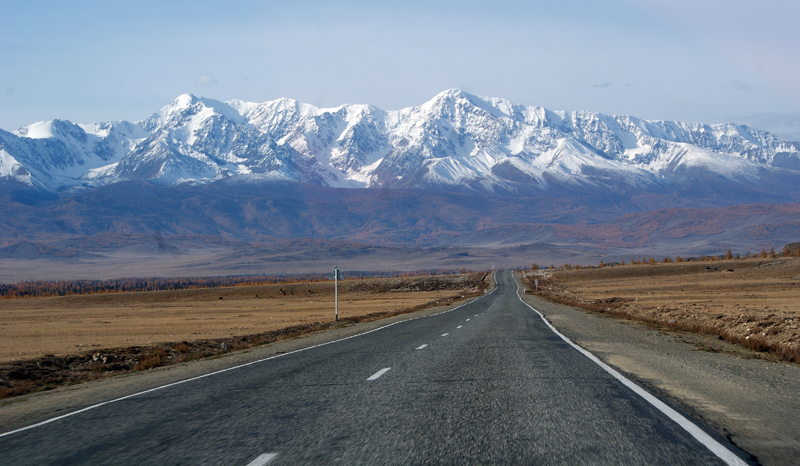 Roads in the Altai are incredibly picturesque. The Chuya Highway marked as Р-252 starts in Novosibirsk and finishes in Tashanta. This is the only route of really good quality. National Geographic magazine included the Chuya Highway in the list of the 10 most beautiful highways in the world. The quality of almost all other roads is much inferior to it. For example, on the way to Ust-Koksa you will have to drive at least 30 km on gravel road.

Any season! The Altai is beautiful in winter, summer, spring and especially in autumn. The peak tourist season is July through August. During this period, you can get into serious traffic jams near Gorno-Altaysk and Chemala. On the trails towards Belukha Mountain or the Shavlinskiye lakes there are a lot of tourists. In winter, you can enjoy peace and solitude and see the mountains in a completely different guise. In spring you have the opportunity to see the awakening of rivers and waterfalls. The Altai is covered with special colors in autumn. It’s time for photo tours, incredible landscapes and turquoise rivers. For high mountain trekking it is not recommended to start before July, as many passes above 2500 meters are still covered with snow, and in the second half of September when there is a big chance of heavy snow or frosts. 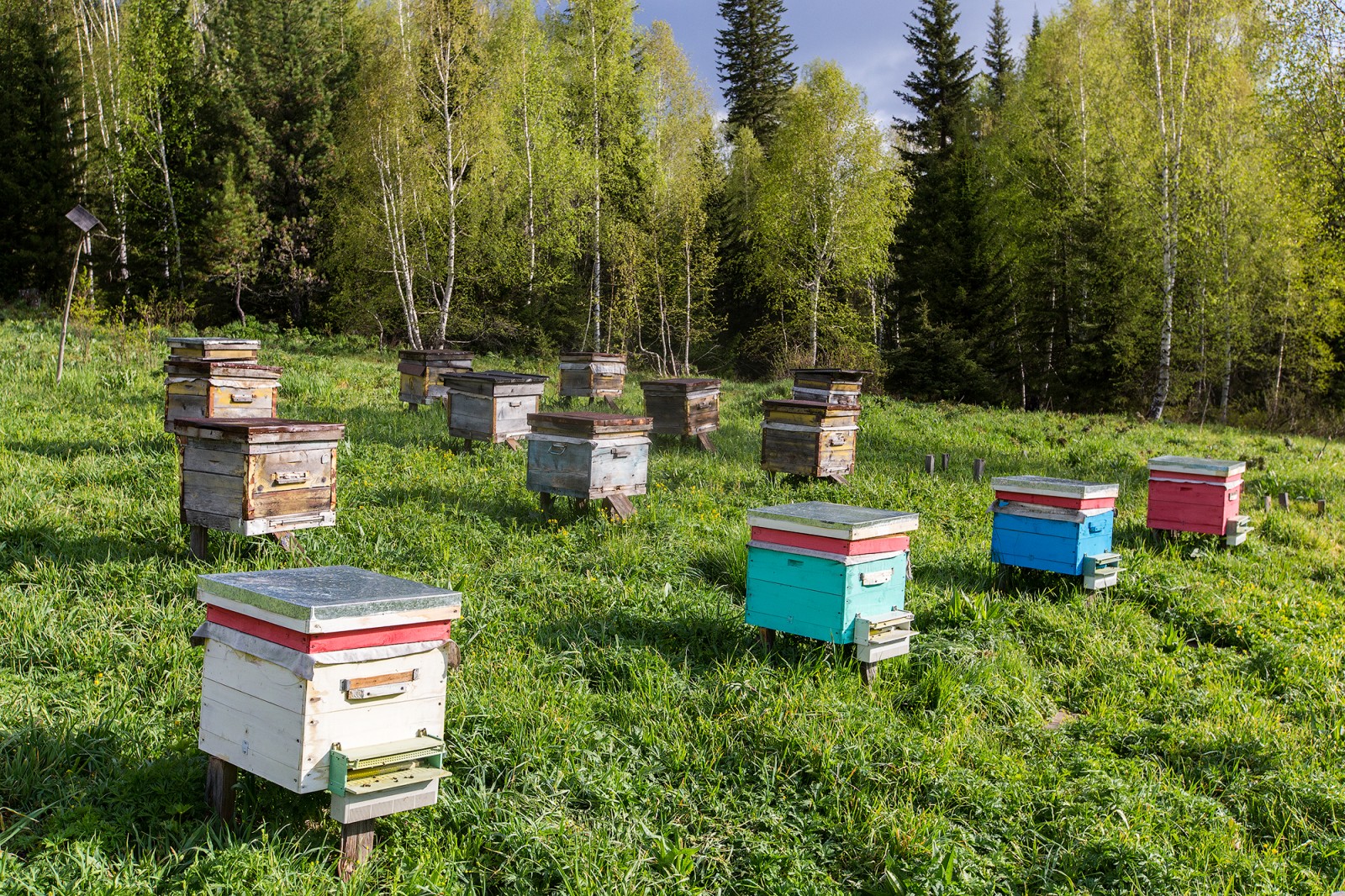 High mountain honey can be called exclusive in the Altai. Honey picking zone is in high mountain meadows of only four areas: Ust-Kanskiy, Ust-Koksinskiy, Soloneshenskiy and Charyshskiy. This type is the most expensive of the Altai honey. Its flavor and aroma are exceptional, and it is considered the standard. There is very little of such honey, and its limited supply causes a very high price. Do not confuse this honey with what is commonly sold on the road for about 150-300 rubles. To get this type of honey you need to go to the places of its collection, preferably to the village of Ust-Koksa.

Harmonious, sensual, fragrant tea made of selected wild herbs and roots of the Altai mountains will help to bring vitality and strengthen health.

12. Cheap airlines in the Altai Republic

Recently, the airport of Gorno-Altaisk has begun to host daily flights of the Sila airline. You can get a round trip ticket to Gorno-Altaysk from Novosibirsk for only 6000 rubles (January 2019) and from Krasnoyarsk for 7800 rubles. Unfortunately, the airline's flight schedule is available only for a month in advance and this should be considered. Flights are available in all known search engines such as Skyscanner or Aviasales.

Note that the plane is a twin-engined turboprop aircraft An-28.

Now local large chain stores Maria-Ra and Aniks are opened in almost every village in the Altai. Therefore, there are no more problems with product supply or inflated prices. Credit cards are accepted in almost every shop, cafe and tourist center. However, it is always better to have some cash with you as well.